Firstly and most importantly, yoga is for EVERYONE!  No matter your size, build, age, fitness or flexibility everyone can benefit from some sort of yoga.

Yoga is not just a series of fancy asanas (postures) that are done in the latest and fanciest yoga pants and in the hippest yoga studio in town.  That idea of yoga can’t be further from what yoga actually is.

In Sanskrit, the word yoga literally means “union” or “connection.” It is a spiritual union of the mind, body and spirit. Originating in India more than 2,500 years ago, yoga is an ancient system of philosophies and practices that help a person achieve union within oneself and their higher consciousness.

The practice and discipline of yoga incorporates Patanjali’s eight limbs of yoga. The eight limbs are not separate to one another, nor are they hierarchical. Instead the limbs are pieces that make up a whole and as such a person can endeavour to live by and practice them as one.

So don’t be intimated by what we in the West have come to know as yoga.  Yoga is so much more than that!

How does Yoga fit with Naturopathic Medicine?

Yoga and Naturopathic Medicine are perfect complements to one another.  As a practitioner I am frequenting prescribing yoga (asanas), deep breathing (pranayama), meditation (dhyana) and/or mindfulness to clients who come to see me for a wide range of conditions including high blood pressure, stress, anxiety and menopause to name only a few.  And there are now clinical studies to back up the benefits of yoga in certain conditions, particularly where there is excessive activation of the sympathetic nervous system.  Why are yoga and naturopathic medicine like two peas in a pod?  Because yoga is a form of mind, body and spiritual medicine (again, not to be confused with religion) and naturopathic medicine seeks to treat the “whole person” through physical, mind, and spiritual means.  So yoga is a perfect tool to empower patients to engage in their treatment plan and reap the benefits.

I offer private individual or small group yoga classes taught in the comfort of your own home or outside in a quiet corner of a park.  Classes are tailor-made according to your physical, mental and emotional ability, whilst still adhering the principals of yoga. 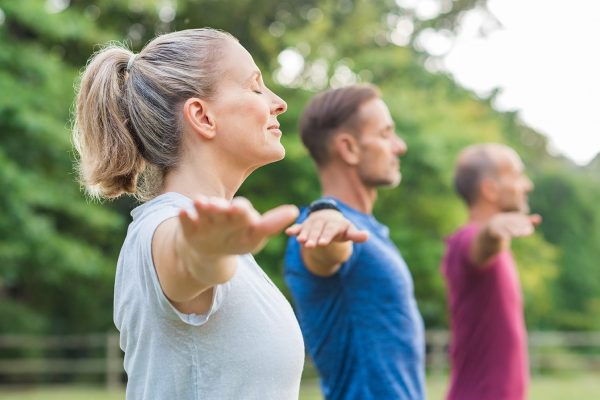 Types of Yoga I offer:

A slow paced sequence of seated and standing poses that encourage matching the breath to each posture. Ideal for beginners or those with yoga experiences that prefer a calmer more meditative type of movement.

A fast paced, energetic and strong form of Hatha-Vinyasa yoga set to upbeat music. Ideal for those with yoga experience and a moderate level of fitness.

A slow and quiet form of yoga comprising of mostly seated postures that are held for 3-5 minutes. This form of yoga encourages stillness, softness and passiveness in both body and mind. Ideal for beginners or the experienced yogi, however can be extremely mentally challenging for some!

So get a few friends or your family together and have fun!

Yoga and Naturopathic Medicine are perfect complements to one another. As a practitioner of both modalities I am frequenting prescribing yoga, deep breathing, meditation and/or mindfulness to my naturopathic clients.

Yoga and Naturopathic Medicine are perfect complements to one another. As a practitioner of both modalities I am frequenting prescribing yoga, deep breathing, meditation and/or mindfulness to my naturopathic clients.

Contact me to book a naturopathic consultation or yoga class.
I will help guide your family to true wellness!